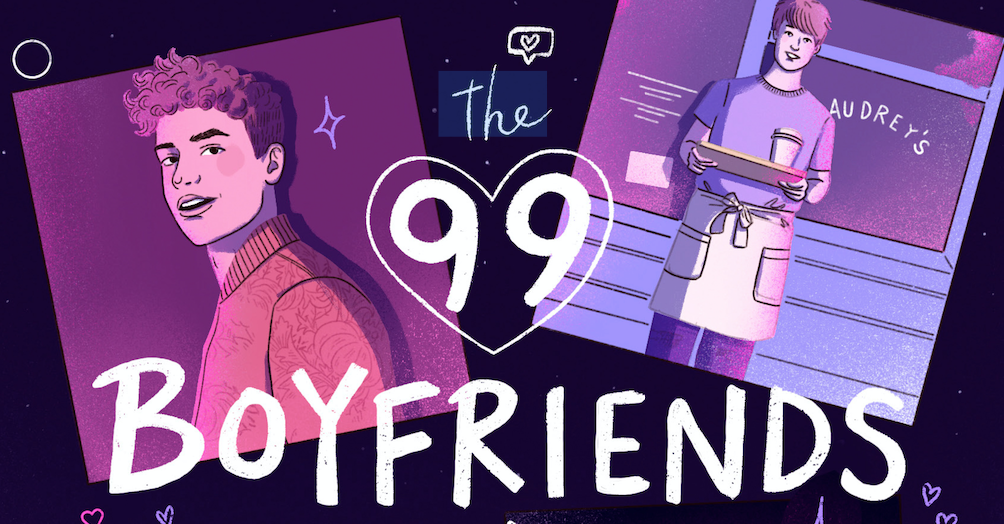 The 99 Boyfriends of Micah Summers by Adam Sass is a charming YA rom-com perfect for fans of Red, White, and Royal Blue and What If It’s Us, coming September 20th, 2022!

Micah Summers runs a popular Instagram full of drawings of his numerous imaginary boyfriends (ninety-nine so far)—though he’s never had a real boyfriend before. But when a meet-cute with Boy 100 goes wrong, Micah embarks on a Prince Charming-like quest throughout Chicago to find true love—for real this time.

Micah is rich, dreamy, and charming. As the “Prince of Chicago,”—the son of local celebrity sports radio host known as the King of Chicago—he has everything going for him. Unfortunately, he’s also the prince of imaginary meet-cutes, since he’s too nervous to actually ask boys out.

Instead, Micah draws each crush to share on Instagram with a post about their imaginary dates. Ninety-nine “boyfriends” later, his account is hugely popular, and everyone is eagerly awaiting Boy 100. So is Micah. He’s determined that Boy 100 will be different. This time, Micah will sweep the boy off his feet, for real!

So when Micah flirts with a hot boy on the L who’s wearing a vegan leather jacket and lugging a ton of library books, he is sure this is Boy 100. But right before he can make his move and ask for the boy’s number, the guy rushes off the train, leaving behind his pumpkin-embroidered jacket. The jacket holds clues to the boy’s identity, so Micah and his friends set off on a quest to return it. Along the way, Micah will discover that the best relationships aren’t fairy tales. In fact, the perfect fit—and true love—might be closer than he thinks.

Scroll down to see the cover and read a sneak peek!

How do I know it’s love? Because I’ve already thrown up twice, and I haven’t even asked him out yet. Although my friends could’ve done without that information, they agree that my anxiety-induced stomach issues provide the perfect excuse to skip school and ask out my first boy ever.

Who could focus on imaginary numbers or the Teapot Dome Scandal on a day like this? The signs that I should finally make my move are everywhere: the typical grey soup of overcast skies has finally broken apart over the Chicago skyline, giving way to a hopeful Tiffany blue. It’s the first warm day we’ve had in half a year, which is perfect for my current mission because I can slip into my favorite black tank top that makes it look like I have ripped arms (twist: I don’t!). I don’t feel guilty skipping. I’ve already finished most of my finals, junior year is basically over, and half the seniors won’t even be present today.

I’ve been circling Andy all through May with the steely-eyed focus of a shark circling a drowning sailor. He’d been dating this girl in my pottery class for almost a year, but she cheated on him during spring break, they broke up, and then Andy started showing up at our school’s LGBTQ+ club meetings.

As secretary of the club, the only meeting minutes I recorded that day were “OMIGAWD ANDY IS HERE.”

Hannah, my best friend (and best spy), managed to learn that Andy would be ditching class to go to Grant Park to record TikToks for his band. So, that’s where I’m headed, as fast as my penny board will take me.

The miniature, hot pink skateboard bucks under the weight of my overstuffed satchel, but I easily correct my balance. I am, after all, a little toothpick boy who is seventeen but looks twelve. Spring wind whips against my face as I glide across the rust-colored bridge between my home on the Gold Coast and the Loop downtown. When I reach the lake, I realize the entire city has chosen to play hooky: sailboat owners, bicyclists, joggers, picnickers—each of us desperate to take advantage of the first hint of warmth since October.

Yet the soothing wind does nothing to quiet the acid bubbling in my stomach.

Today is the day Micah Summers asks out his first boy, win or lose.

It better not be lose!

When I finally stop my board outside one of the stone barriers into Grant Park, a stroke of luck finds me: Andy McDermott is already here. And he’s alone. It’s unfathomably rare to find Andy without his circle of intimidating friends.

Yet here he is without them, in line at a street-side hot dog cart.

Andy is a boy straight out of a fairy tale—but like, the vaguely punk kind from Descendants. He has curly, dark hair dyed aquamarine at the tips, a smattering of freckles over his lightly tanned cheeks, a stud earring, a flannel top tied around his waist, and silver rings on every finger. Ideal retro music video vibes.

Breathing steadily, I lick moisture back into my lips, clip my board to the back of my satchel, and join Andy in line.

He doesn’t see me yet. My heart won’t settle.

How am I supposed to start a conversation? Once I manage that, how do I ask him out in a way that’s casual enough to not be off-putting, yet direct enough to avoid our date becoming a passionless friend hangout?

Cover Reveal: MELT WITH YOU by Jennifer Dugan

Cover Reveal: BEAUTY AND THE BESHARAM