Chris Stuck knows what he’s doing. In Give My Love to the Savages, his debut short story collection, deliberation and intention shine through. These are stories centered around the anguishes of Black men, rendered here as both heroes and antiheroes. The stories are forthright with their unpacking of masculinity, grief, and identity. And at their best, they linger ceaselessly in the mind.

Stuck begins strong with the tightly focused “Every Time They Call You N*****”, which spans some thirty-odd years in the narrator’s life. We see racism in all its iterations, from childhood parroting, to changes in the lexicon, to how the word is used among Black people in the narrator’s life; how time can change meaning. Stuck uses second person, pointing a finger at “you,” but there’s no attempt to water down the message for the masses to understand. “You” is both personal and specific.

This perspective carries over into “This Isn’t Music,” one of the strongest stories in the collection. Here we meet another speaker, a self-admitted asshole, tormented by his actions, and still cheating on his wife. The dialogue between the speaker and his affair partner, each line often prefaced by “Black boy” and “Black girl”, show both comfort and the slow loss of comfort, as a connection dating back years starts to unravel. These are experiences meant to illustrate, narrowing the narrative distance with “you,” but never giving readers the illusion that it’s really us.

While point of view varies in this collection, Stuck rarely deviates from the perspectives of men, with the exception of short ruminations in a character called Tina’s perspective in a story called “Chuck and Tina Go On Vacation.” It is clear that he has no trouble writing about women, although in the male perspectives they often appear vindictive and hollow. However, this point of view sheds more light on the flaws of his male protagonists rather than poor portrayals of women. Indeed, the near omission of female perspective in this story is clearly a creative choice to hone in on issues of masculinity.

Perhaps these masculine conflicts ring truest in a story called “Cowboys”: two security guards, one middle-aged and white, one young and Black, pass through mundane hours of their lives in a haze of drugs and alcohol, and then ultimately resort to a spur-of-the-moment run at bounty hunting. The result is puzzling and tragic, yet ultimately understood with the built framework of threatened manhood and mishandled grief.

In the title story, Stuck displays another form of loss by describing the unfathomable gap between a Black son and his white father in the midst of the 1992 LA riots. Larger conflicts are rendered intimate and personal, like microcosms of the whole event. It is these in personal moments, such as the mentioning and non-mentioning of infant loss in “Cowboys,” that Stuck hits home.

Where these explorations of masculinity fall slightly short are in the more absurdist stories of the collection, such as “How to Be a Dick in the Twenty-First Century”. Here, a billionaire narrator aptly named Dick Dickerson wakes up one morning, a la Kafka or Philip Roth, and finds himself transformed into a giant penis. Ultimately this story, while provocative, is weighed down by premise alone and cannot easily be elevated. In “The Life and Loves of Melvin J Plump, Esq” we see another transformation, this time a Black man is turned fully white by an advanced case of vitiligo. My own thoughts on vitiligo aside (I myself have a mild case), this is another story where the catchiness of the premise trumps the events of the story itself. Stuck writes several versions of “assholes” in this collection, but these characters at their worst remain too one-dimensional to garner interest in their narratives.

Overall, however, Stuck presents us with a strong, focused debut collection. He creates nuanced characters, crafts varied perspectives on race and gender in America, and shows off his talent for economy of words and sharp dialogue throughout the book. As a young Indian-American woman, likely not of Chris Stuck’s intended audience, I enjoyed this collection on the outside looking in, and revel in this perspective. To me this collection helps debunk the idea that men are not privy to their own flaws and insecurities. Rather, when these are claimed and understood, art can result.

FICTION
Give My Love to the Savages
By Chris Stuck
Amistad Press
Published on July 6th, 2021 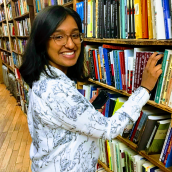 See You in the Next Life in “Love Like Water, Love Like Fire” – Chicago Review of Books