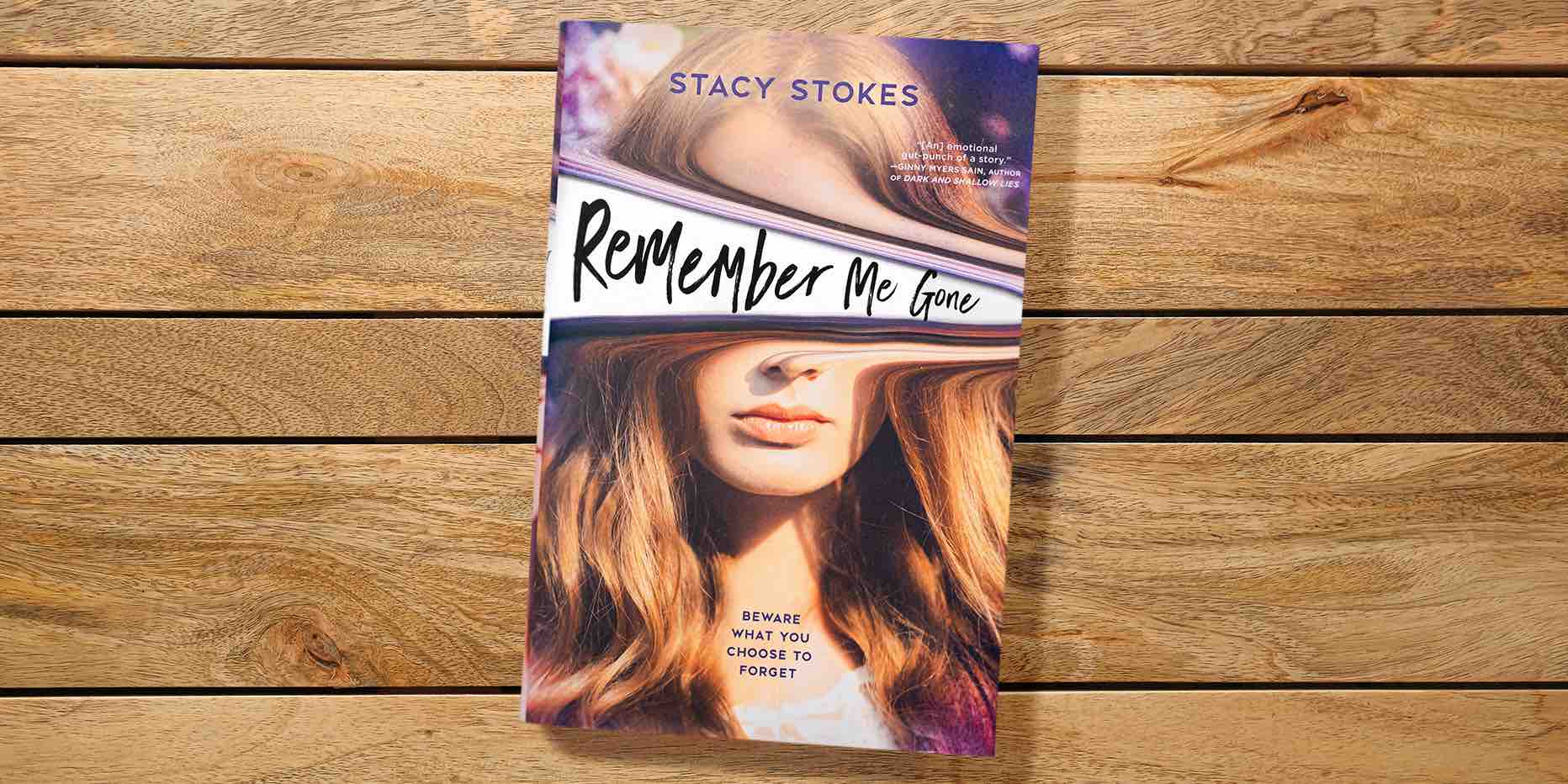 Lucy Miller’s family has the unique ability to remove people’s painful memories—but Lucy isn’t prepared for truths she will uncover in this twisty speculative thriller, perfect for fans of Eternal Sunshine of the Spotless Mind.

People come from everywhere to forget. At the Memory House, in Tumble Tree, Texas, Lucy’s father can literally erase folks’ heartache and tragic memories. Lucy can’t wait to learn the family trade and help alleviate others’ pain, and now, at sixteen, she finally can. But everything is not as it seems.

When Lucy practices memory-taking on her dad, his memory won’t come loose, and in the bit that Lucy sees, there’s a flash of Mama on the day she died, tinged red with guilt. Then Lucy wakes up the next morning with a bruised knee, a pocketful of desert sand, and no memory of what happened. She has no choice but to listen to Marco Warman—a local boy she’s always wondered about, who seems to know more than he should.

As Lucy and Marco realize there are gaps in their own memories, they team up to fill in the missing pieces—to figure out what’s really going on in their town, and to uncover their own stolen history along the way. But as the mysteries pile up one thing becomes certain: There are some secrets people will do anything to keep.

Scroll down to read a sneak peek!

The voice is a hiss in my ear.

Every bone in my body tells me to do just the opposite, but my throat feels like I swallowed half the desert. The hand covering my mouth tastes like salt, which only makes it worse.

The grip on me is light—­too light for someone trying to hold me against my will. All I need to do is give a small shove and I could make a run for it. “There’s someone in the trailer and the walls are like paper. If I take my hand away, do you promise to be quiet?”

An elbow to the ribs would do it for sure. But there’s something about the timbre of that voice.

I know that voice.

So I nod once. The hand slips from my mouth. I tamp down my instinct to run screaming into the night and turn to face him.

He looks at me from underneath the brim of a dark low-­slung hat, his face flat and unreadable. His cheeks are smeared with smudges of camouflage, making his eyes and teeth gleam white against the night sky. He looks like he wants to blend into the desert, not like he wants his uncle or the men with the guns to know he’s out here.

He presses a finger against his lips and points to the trailer about ten yards behind us, like I might not have gotten the message the first time. I narrow my eyes at him. What’s he doing here? How do I know he’s not a lookout for his uncle?

If I make a run for it, it would get the attention of the armed men down by the mines. If I don’t run, the mayor’s nephew might . . . what? Kidnap me? Turn me in to the mayor so I end up facing the men with guns anyway?

Marco’s eyes are wide and pleading as they flick back and forth between me and the opening to the mines, like he can tell there’s a scream on the tip of my tongue. Then they open even wider and he grabs my arm and tugs.

I manage to wrestle free from his grip. “What do you think you’re doing?” I whisper.

He motions silently toward the line of people. The man my father just finished unburdening is walking toward the parking lot, looking like he doesn’t yet have his wits about him. And he’s headed straight for us.

I freeze, looking for a viable place to hide that isn’t in the direction Marco went in case this is all a big setup somehow, but there’s nowhere else that doesn’t place me in plain view of the man marching toward us.

“Lucy!” Marco hisses, eyebrows arching expectantly, as if following him is the obvious choice and he isn’t dressed like a kidnapper. But he’s right—­this is my only option.

I take a deep breath, then crouch-­crawl toward the cluster of plants Marco’s hiding behind. I have to press in close to make myself fit and keep both of us hidden. My arm heats when it connects with his.

A few seconds later the slack-­jawed man stomps straight through the place I’d been hiding a moment before. His foot makes contact with the flashlight I dropped earlier and it scuttles across the dirt, disappearing into the darkness. The man doesn’t so much as flinch; he continues forward at an unwavering pace.

There’s something about the way he moves. It’s . . . odd. When people leave the Memory House without their burdens they look light as clouds, like there’s barely enough gravity to tether them to Earth. But this man is moving like he’s got boulders strapped to his back.

I hold ramrod still, straining my eyes to see as he crosses the parking lot, climbs inside a dust-­covered sedan, and turns the ignition, all with the robotic movements of someone not quite right in the head.

Once he’s gone, I let loose a long breath. I feel Marco relax next to me, too. We turn back to look toward the mines.

The mayor paces the stretch of people, his mirrored sunglasses glinting beneath the lights strung around the mine opening. The armed guards are on opposite ends of the line, guns poised and ready.

Dad releases the hands of another person and they begin the same glassy-­eyed march toward the parking lot as the previous man, jaw slack, back hunched, and arms swinging loosely as if something inside them got snipped from their center and they don’t quite know how to move without it.

Marco’s mouth is pressed into a thin line, his face unreadable behind the camouflage smearing his cheeks. He sits so still I’m not even sure he’s breathing. His eyes are fixed squarely on his uncle.

The mayor stops in front of the next person my dad’s about to unburden. It’s Missy from Patty’s Pie Pantry—­she works the weekend breakfast shift and always gives me an extra pancake when I come in. Her eyes have gone round and her lips are moving, whispering something I can’t make out from this distance. The arch of her brow makes it look like she’s on the verge of tears.

Mayor Warman places his hand on her shoulder. I strain to hear what he says. “Missy, I really am sorry about this. It’s just a precaution, that’s all. It’ll all be over soon. You understand, don’t you?”

Missy nods uncertainly just as the man behind her steps out from the line, the fury on his face burning a hole into the night. It’s Mr. Lewis, the mailman. He pulls the hat from his head and crushes it in his hand, waving it in the mayor’s direction.

“Why are you doing this to us?” Mr. Lewis raises his chin, like he’s ready for a fight.

“I told you, it’s just a precaution. It’s for your own good.” The mayor’s voice is placating, like he’s talking to a small child.

“Like hell it is.” Mr. Lewis steps closer, his mouth twisting into a grimace. Even from all the way back here, I can see he’s shaking. “What you’re doing out here—­it isn’t right.”

The mayor takes a slow step toward Mr. Lewis, raising his palms as if in surrender.

“Come on now, Pete. No need to get so upset. We’re all friends here. Just calm down, all right?”

“Don’t tell me to calm down. You’re stealing our memories because you don’t want us telling anyone what you’re doing, aren’t you? It’s not right!” His voice raises to a roar, and he steps so close he’s practically nose to nose with the mayor.

Mr. Lewis is barely there for a breath before one of the armed guards grabs him by the shoulders and hurls him into the dirt. He crumples into a heap. Mayor Warman takes a step toward him and shakes his head.

“Every time, Pete. Why do you have to do this every single time?”

Mr. Lewis looks up at him from all fours. “What are you talking about?”

The mayor says something to one of the guards, and he disappears into the opening of the mineshaft. A few seconds later he emerges with a jar. There’s something black inside of it.

“What do you mean, every single time? Has this happened to me before?” Mr. Lewis pulls himself up so that he’s on his knees, his hat clutched tightly to his chest like he’s praying.

“I really hate that you’re making me do this, Pete. I really do. Just remember, it didn’t have to be this way.” The mayor lets out a bark of laughter and slaps his knee like someone just told him a hilarious joke. “Aw, who’m I kidding? You’re not going to remember a thing.”

The guard with the jar marches toward Mr. Lewis just as the other guard grabs him from behind, pinning his shoulders so that he can’t move. Then they press the jar to Mr. Lewis’s lips and pull his head back by his hair, forcing him to drink some of the thick black concoction inside.

At the same time my father lurches forward, but the mayor seizes him by the arm.

“Stop it! You can’t keep doing this to people—­”

“Easy there, Charlie.” Mayor Warman yanks Dad backward. “Wouldn’t want to have to hurt you or Lucy again, now would I?”

Dad goes still. The night is a fist squeezing around me. What does the mayor mean by again?

All at once Mr. Lewis’s face crumples and his body goes slack. The guard releases him, and he falls to the ground. At first I think he’s unconscious—­that whatever they made him drink knocked him out. But then he starts to sob, a low keening sound that makes me want to cover my ears. He places a hand over his heart, shaking his head, and the sob becomes a wail. He starts to rock back and forth. Tears shine on his cheeks. All the while his hand is pressed to his chest, like he’s trying to hold his heart together.

“What’s wrong with him?” I whisper to Marco, but I can tell by the look of horror on his face that he has no more of an idea than I do.