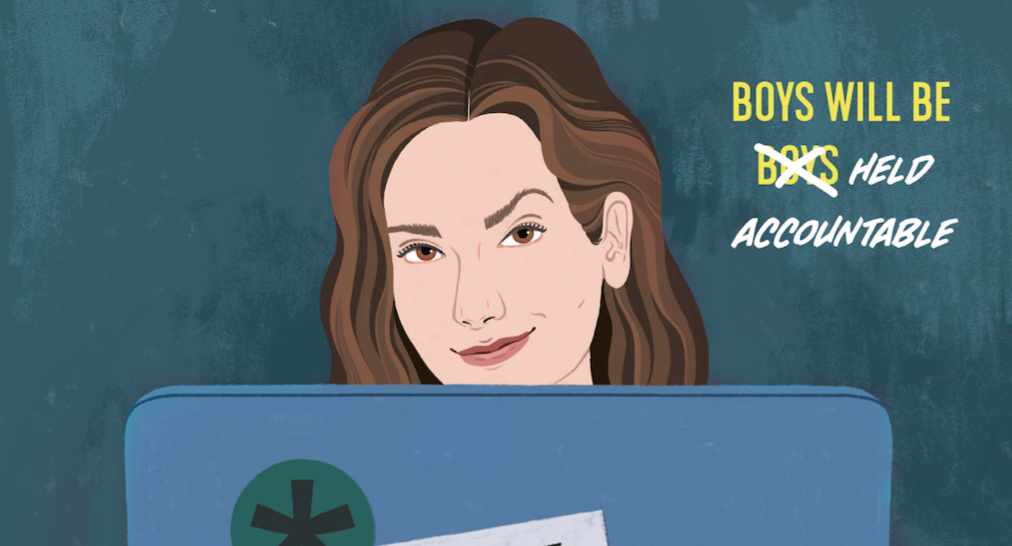 See the epic cover of Margot Mertz Takes It Down by Carrie McCrossen and Ian McWethy. Veronica Mars meets Moxie in this hilarious and biting YA contemporary novel following Margot Mertz, a girl who runs an internet cleanup business and embarks on a quest to take down a revenge-porn site targeting the girls in her school.

Scroll down to see the cover and read an excerpt!

Over the past two years, I had sat across from teachers, students, parents, and one time a state legislator. I listened to the details of their affairs, their embarrassing tweets, their shameful videos—and then I’d make it all go away. That was the job. For the right fee, I would go to the ends of the internet to clean up their mistakes.

In this case, Mrs. Blye, a tenured chemistry teacher at Roosevelt High, cheated on her husband with Josh Frange, a chemistry teacher at Brighton High. (Brighton is our school’s rival. If you care about high school rivalries, which I don’t.) Josh had kind of a rep. He was a teacher-slut who slept with most of the district’s STEM departments. I’ve seen his Instagram account, and I have to say I don’t quite get it. In my opinion, he’s an average-looking forty-year-old with a very punchable face. But to each their own, I guess.

Mrs. Blye was now freaking out because one of those photos had shown up on Josh’s Instagram feed. It was one of their tamer “duet” pics, but it contradicted her alibi that she “went bowling with Sheila.” Mrs. Blye worried that it was only a matter of time before more pictures showed up on his feed. Or before her husband saw it and started asking questions. She’d tried texting Josh to see if he would take it down, but so far, he hadn’t responded.

“Well?” Mrs. Blye asked after telling me her sordid tale. She was dying for a response.

I know this may sound like an easy gig. I mean, all Josh did was post one picture, right? But it was never that simple. You never knew how many pictures or tweets or emails there were, or who had downloaded them. You never knew where they were stored. On just one phone? Uploaded to the cloud? Backed up on a laptop? And you never knew what your target’s intentions were. What was Josh planning? If he was just a careless dum-dum who didn’t realize he was putting Mrs. Blye at risk, then erasing the pics might be easy enough. But if he was purposely trying to break up Mrs. Blye’s marriage? Well, that could get ugly real fast.

My gut told me Josh Frange was going to be a pain in my ass. And that Mrs. Blye probably hadn’t told me the whole story. Which could mean tons of billable hours for one stupid picture.

“I have to think about it.”

Mrs. Blye wrinkled her UV-kissed brow. “I have to think about it” wasn’t the answer she was expecting. Suddenly, she was a pissed-off teacher who would not accept your forged doctor’s note. “What is there to think about? My life is falling apart, and I’m willing to pay you. What the hell else do you have going on? Studying? Extracurriculars? An awkward hand job? You’re a high schooler!”

High schooler? That pissed me off. The label “high schooler” completely trivializes what I am. Labels I prefer? Entrepreneur. Tech-curious. Lone wolf. Daughter. Misanthrope. Possible witch. (Okay, I’m not a witch at all, but Greg Mayes called me that once in a study hall, and I have to admit, I kind of liked it. Even though the witchiest thing I’ve ever done is burn palo santo in my room.) Point is, call me any of those things! But when you say “high schooler,” it sounds like I’m some dud who doesn’t know who she is. And I know who I am. I’m Margot Goddamned Mertz.

And besides, Mrs. Blye needed my help! Did she think her “I’ll send you to the principal” voice would really scare me? She just told me she’d had an affair! I had the upper hand!

But of course I didn’t say any of that or even show the slightest bit of resentment. Because I’m a professional. I simply responded, “It’s gonna cost you.”

May is upon us! See what’s hitting shelves this month

COVER REVEAL: When We Make It