One version of the American dream is based on the idea of owning a piece of the land. That dream seems harder to achieve every year for most Americans priced out of home ownership. Colorado’s San Luis Valley promises an exception. Cheap land can be yours in five acre plots at an affordable price. It seems like an offer that is too good to be true. In his latest book, Cheap Land Colorado: Off-Gridders at America’s Edge, Ted Conover explores the opportunity first hand when he purchases a plot and sets up a part-time home.

Conover arrives in Colorado first as an observer without a plot of his own. He quickly hooks up with a social outreach organization, La Puenta, participating in a program that takes him around the valley to meet and talk with people already living on the land. After his initial excursion, Conover buys a trailer and begins renting a place to park it from the Gruber family, a husband, wife and five daughters living on their plot.

The first thing Conover learns is how cold it can get in the valley when he wakes up to frozen bottles of water.  The Gruber property doesn’t have a well, so like many people in the valley, he must bring in bottled water from offsite. There are no utilities on these plots—no electric, gas, sewage, water, communications—nothing. Land owners learn to provide their own or they go without. Even cellular service is hard to get.

The people who live here spend much of their time criss-crossing the empty valley. The land is cheap because there is little demand, and few people. Conover observes, “A flip side of having all that space to yourself can be loneliness.” For some of the subjects of the book, the isolation is the point.

Despite that emptiness, Conover finds people, and it is their stories that drive the narrative. A few of these people are present throughout the book, a common thread, like the Gruber family, and Matt Little, who is responsible for La Puenta outreach. And there is Troy Zinn, his neighbor who Conover shares a property line with. Outside of the core group, there are vignettes from people Conover had more minor encounters with. All together, they create the dramas big and small that create a sense of plot.

It is the coming and going to the valley, the building of lives, the breaking of lives that creates interest here. For instance, Conover meets a woman who only lives on the flats for a few months before finding a more traditional life as a truck driver based out of Alamosa. Or the couple who try selling a plot of land so they can pursue their dream of sailing in Florida, only to have plans fall through when the buyer stops paying.

The residents of the valley are not monolithic, and generalities are hard to make. Some of them tend toward conservatism, and some of them become conspiracy theorists, but others are libertarians—and some libertines—with no agenda other than being left alone, or alone with their polyamorous cult members. Meth is everywhere. The people are racially diverse, Black, Hispanic, White, and Native. If there is any commonality, it is that so many of them are broken and have come to the valley to find something resembling peace.

Poverty is persistent throughout the book, and one thing Conover never really reconciles is his privilege. He comes and goes from the flats at will. He keeps a life in New York City. He roughs it for periods of time, but always his life is rooted in the city. His experience then is quite different from the people he meets who are much more yoked to the land. For the majority of residents, everything they have is tied up in their plot, and for most of them, this is nothing at all.

The book does promise an exploration of off-grid living, but here there are some limits. Many of the early homesteaders are using the technology they invested in when they first arrived, ten or twenty years earlier. Even when Conover buys a plot, it is littered with older, useless equipment. His attempt to update his electrical grid with a carbon fiber turbine is foiled when a strong wind knocks it down. There is little technical information here other than that the people living on the flats are cold and have a hard time getting cellular service. Living this way is hard, and takes a toll on many of the subjects he encounters.

Conover writes about how county code enforcement sometimes takes an adversarial role to harass the people in the valley. The biggest issue is the fines they issue to homesteads that lack septic systems, a cost that often exceeds the value of the land by several fold. There are rules against camping too, although these are enforced unevenly. The code enforcement leaves many of the residents leary of visitors, but also illustrates the disconnect between Conover and the subjects of his book. Purchasing a plot, a trailer, a new carbon fiber turbine, while not cheap, never comes across as a hardship for Conover. Meanwhile the other people he encounters, even folks like Matt, who has a job with La Puenta, struggle financially.

The cattle are a persistent source of amusement. The cheap land was once ranchland, since sold and divided into lots. The open range technically still exists and private farmers drop off their cattle to fatten them on public land and unfenced private pasture. But they cause a ruckus destroying property and gardens and soiling the river with muck. Individual landowners become responsible for fencing their land and keeping cows out, but sometimes the locals shoot the cows and eat them.

It might seem surprising that a land so vast and empty, devoid of people and isolated, would be impacted by the pandemic. And still, it was. Even in the tiny town of Blanca, the few restaurants were closed by state orders. The food bank anticipated a run on canned goods. And while they had their share of pandemic deniers, during one get together, a responsible person had marked out six foot gaps on their deck with tape. The biggest impact though seemed to be the government stimulus checks. Most of the residents splurged on splashy gear like iPads, or shoddy investments like an unnecessary welding kit, stimulating the economy rather than sitting in bank accounts. Perhaps this too is the effect of loneliness: “Go-karts and minibikes weren’t the same as vodka. But they did seem to fall into the same category of possibly unwise purchases that would make a person feel better.”

Whether the people of the San Luis Valley have found the American dream or not remains unclear, but many seem happy. None of them have realized any financial gain from their investments as the land companies selling the cheap land once promised. But Conover reflects on his own position. He found himself happy in Colorado, but relying on New York to cure his loneliness. He was never in a position where buying into the valley was his last best hope as was the case for so many people around him. The off-grid lifestyle doesn’t cure poverty or mental illness and certainly not loneliness, but perhaps it allows some people a sense of place. 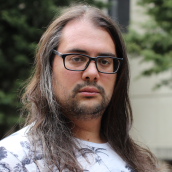 
Ian MacAllen is the author of Red Sauce: How Italian Food Became American, forthcoming from Rowman & Littlefield in 2022. His writing has appeared in Chicago Review of Books, The Rumpus, The Offing, Electric Literature, Vol 1. Brooklyn, and elsewhere. He serves as the Deputy Editor of The Rumpus, holds an MA in English from Rutgers University, tweets @IanMacAllen and is online at IanMacAllen.com.