In my parents’ house there is a shelf set aside for over a dozen yearbooks, stowed away and rarely seen or even thought about, and Shashi Bhat’s The Most Precious Substance on Earth brought to life that dusty shelf and its contents. The packaging of memory in glimpses. The fleeting impressions of former lives. In many ways, the contents of that shelf—and Bhat’s novel—place an emphasis on breadth over depth.

We open with Nina, our sole narrator and the focus of this novel, in the midst of her freshman year of high school. What begins with harmless crushes, feelings of alienation, catty friendships, and suspicious internet practices quickly spirals into a horrific event. It is there, and then it vanishes. We see Nina again in her high school band. Then in her MFA program in Baltimore. Then with her immigrant parents, then on ill-fated dates, then at the head of her own classroom. The novel is a yearbook extending long past the awkward years of adolescence, and as Nina develops an awareness of the world around herself, the novel sprawls out of control as seemingly discrete events overlap one another and lead us to wonder if there is a plan to the madness.

Structurally the novel resembles a short story collection, the book broadly divided into two parts with each snapshot of Nina’s life given a title and its own narrative arc. But rather than picking and choosing individual snapshots that stand out above the rest, it is clear that Nina’s voice gains strength over the years, and therefore her experiences in adolescence feel stilted when compared to later anecdotes. Although everything is told retrospectively, the early chapters lack the focus and reflection that Nina grants herself with age. In many ways this is the experience of adolescence, with its constant pop culture references and meandering thoughts. The narrative is far from inauthentic, and while beginning with adolescence sets the stage for events to come, I found myself wanting to linger more in part two, when the novel truly picks up steam.

Perhaps the strongest sections of the novel are the ones that highlight Nina’s many identities. Her omnipresent fear when confronted with a pushy male student in her English class. Her tense relationship with her well-meaning parents when confronted with an ideal exchange student. Her strained silence in her creative writing workshop, where she’s forbidden from speaking while the room questions the presence of Indian characters when no one is doing anything “Indian” in the story. These identities, like the sections of the book itself, overlap and crash against one another. Nina is nothing if not real. Her self-centeredness is hard to swallow but easy to consume; there is a palpable familiarity there. When Bhat describes the falling away of a friendship, she encapsulates the entirety of growing older in internet culture: “This person who was once the most vivid part of my daily life is now just a social media afterthought. The punchline to a dark joke whose opening I can’t recall.”

I came to The Most Precious Substance on Earth for a character study, and a character study was what I received—one stretched by the length of decades, rather than homing in on a specific era or time, but a character study all the same. Nina frustrates, humors, horrifies, and exhilarates in the scope of these pages. Reading her life on the page, though fictional, feels voyeuristic in that dusty-yearbook way, and ultimately I truly lost myself in the spectatorship. 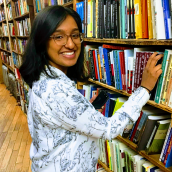