The ghosts of Dennis Mombauer’s The House of Drought are many, as many as there are allegories. The established fact of extraction, the ritual of sacrifice, the deviance of the unknown—these are its themes. None of these beasts are as powerful as the global narrative that has already been spinning: the irreversibility of climate change wrought through colonial extraction. Thus stands the haunted house of this novella, a colonial building in rural Sri Lanka (Anathakundu, to be exact) that sucks out all the water of a once-powerful, robust, “hydraulic civilization”: “The abandoned mansion controlled the flow of the story like the sluice gates of one of Sri Lanka’s irrigation tanks.”

Mombauer’s narrative takes place over five acts, from a prelude set in our present to a denouement trapped within a timeless structure; each act follows the experiences of individuals within the residence. The house, alternatively called “the Dry House,” is a two-storied mansion that a British tea-trader built with teak from “Rangoon” and “neoclassicist columns” in the late nineteenth century. A palace encroaching upon the wild forest, the house bears a resemblance to old gothic structures, where secrets abound behind the moneyed veneer, and much like Daniel Kehlmann’s You Should Have Left, Helen Oyeyemi’s White Is for Witching, or, more famously, Mark Z. Danielewski’s House of Leaves, the mansion has a hidden, interior self of its own. The house within the house is a protrusion upon forest land, characterized by lack of moisture, a perpetually shifting and growing space, and upside-down interiors—an inversion of reality. The narrative follows the house as it traps its various inhabitants, and Mombauer repeatedly emphasizes how the house sucks out all moisture, extracts every drop from their bodies; while the allegory of colonial extractivism is apparent, even belabored through mention, the form—capitalist accumulation—is ambiguous, even as the narrative presents a historical sense of economic, cultural, and climatic changes.

Mombauer is a writer sensitive to difference, and he manages to weave a polyphony of characters who, in each act, have differing epistemic foundations, each to offer a competing sense of the allegory of the house. The central character, Bernhard, a German journalist and filmmaker, chances upon the house while attempting to report on climate change in the nation. He sees it as an abandoned ruin in the midst of a failing harvest, a “human element” to hook his readers. Well-intentioned he may be in his search, but he cannot accept the histories the locals provide about the house and the forest surrounding it. Bernhard is perhaps like the author himself, a German who, after five years in Sri Lanka, writes in his author’s note, “I still remain a foreigner.” Bernard feels alienated from the subject of his attention and the culture, and his inability to understand is the pivot, the turn of the screw, through which other experiential and embodied knowledges are admitted. While reporting at the house, he tries to recreate the scene, and his assistant asks if he knows what has happened: “Enough to be truthful?” she demands to know. Here the next act begins, a short narrative of three loggers who believe in the legends of the forest.

Oral history, legend, myth, and children’s stories are all part of the logic of narrativized horror, albeit sometimes used too simply and in causal ways. The House of Drought represents a narrative about a haunted house as a site of colonial extraction, but the allegory works only when the world it is extracting from is brought into relief. The house is surrounded by an agentive, living, and mutable forest. The forest is not a primordial entity, but a relational space with its own beings—gods and monsters—and the people of the village have their own interpretive frameworks. They see the house and the forest as part of a world that has been changed by humans, which now exists in tension with humanity itself. Literature about climate change and ecology from the once-colonized, now-modern nations (where the impact of change is inarguably felt the most) has widely reclaimed indigenous knowledge systems and traditions, perhaps because of the widening of the genre category, or the broad acceptance of magic realism, or even the growing interdisciplinary fields of studying the non-human. Mombauer writes a speculative novella about climate change that is rooted in alterity, existing in a milieu of writers like Nina Allan (The Rift), Silvia Moreno-Garcia (Mexican Gothic), and even Amitav Ghosh (The Hungry Tide and others).

For Mombauer, some of this alterity is anthropomorphic, a quality of vengeance attributed to the gods of the forest, and all that is diabolical is easily attributed to nature avenging itself upon encroaching humanity, but it becomes all the more evocative where the narrative doesn’t explain, leaving the atmospheric horror taut on the page. The House of Drought is too full of characters and ghosts, and too taken by the atmosphere of water and its absence, to flesh out the micro-historical drama of climate change. The only character, vividly described and rarely whole, is the forest, which houses and people simply pass through. It is in this sense that one must read the novella, as a brief incursion into the immediacy of horror, and a sharp but quick glance at the history that has brought us here to face it. 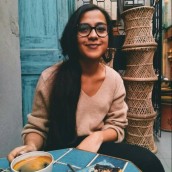 Shinjini is a freelance editor, writer and reviewer. Her work can be found in The Ancillary Review of Books, Bloodknife Magazine, The Swaddle, Decolonial Hacker and others. Find her @shinjini_dey